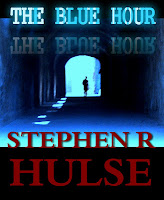 The Blue Hour
"The French call this time 'l'heure bleu' - The Blue Hour.  The time between dawn and sunrise when the sun is below the horizon, and the world is awash with a hazy shadowed hue that suspends us between the accepted divisions of light and dark.  It should have been beautiful.  For me, it was now only beautifully deadly..."

Add a tough, no-nonsense enigmatic American Private Eye who isn't quite all he appears - Gideon Wade ...

Enmesh them in a dark and deadly web of international intrigue engineered by a shadowy criminal organisation for whom human life is just another commodity to be cynically traded for power and profit ...

Then dive for cover as fists fly, blood spills and all hell breaks loose!

Get your copy now

The barriers are coming down. Reality itself is beginning to unravel.
Come apart at the seams. Things - dark forces - long excluded are beginning to claw their way back into the world

The Fate of humanity itself hangs in the balance.

Humanity needs a hero, a champion. What we get it - Martin Thorn. The wrong man, in the right place, at most definitely the wrong time. The Wit and sophisticated suspense of Alfred Hitchcock collides with dark Supernatural adventure in "Shadowchaser"

Get your copy now