Snow Blind and Other Shocks 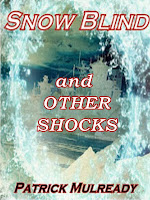 Snow Blind, a scifi adventure off world where snow isn't as pretty as you think

I Got Ripped in 4 Weeks, the dangers of taking dietary supplements?

Gemina, Wyoming, a man looking for a new life.

Death Is In Season, don't mess with things you don't understand!


For links to buy check out Patrick's page here
Posted by Kristen Stone at 16:20 No comments:

The Goldilox Effect Book 2 of the Stalk Holding Super Heroes 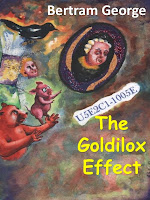 BHP - Books for Children is pleased to announce the release of the second book in the Stalk Holding Super Heroes series.

Find out if our heroes can save the fairy stories of the world being wiped out for ever.

See Bertram George's page for links
Posted by Kristen Stone at 15:57 No comments:

A new book from Tom Winton

A Second Chance in Paradise

Long Island salesman Sonny Raines has had it. He’s sick and tired of living in a world where wrong always wins over right. Then, on his thirty-ninth birthday, when he loses his job and comes home to the most devastating shock of his life, that’s it. He’s dropping out. With nothing left to lose, and little in his pocket, Sonny chucks it all and drives his aging van fifteen-hundred miles to the lower reaches of the Florida Keys. All he wants is to get over his recent losses and simplify his hectic life, and that’s exactly what he thinks he’s doing when he settles on a paradisiacal speck of an island known as Wrecker’s Key. While surrounded by the warm aquamarine waters of two tropical oceans, he not only falls in love with the key but also establishes a close bond with the free-spirited locals who call it home. But all isn’t blue skies, swaying palms, and coconut oil on Wrecker’s Key. There’s trouble wafting in the warm breezes that caress the island. Although Sonny certainly isn’t looking for romance, he finds himself falling for his next door neighbor. Ex-model Julie Albright just may be the kindest, most beautiful woman to ever grace his eyes, but there’s a snag. She has a small physical flaw that, no matter how hard he tries, Sonny can’t overlook. And his feelings are no secret to Julie. She can read them, and they weigh as heavy on her heart as they do on his. Then things get even worse. One night, under the cover of darkness, danger drifts up the deep, silent currents from the lower keys—serious danger—life and death danger. And Sonny Raines finds himself right in the middle of it.
And if that wasn't enough, I have an excerpt for you to make you want even more! Believe me after reading the following bit, you will click one of the links below and get your copy of the book. :-)
“As soon as I stepped outside I broke into a trot. Passing all the rest of the trailers first then heading up the same narrow road I followed Julie home on the night before, all I could do was think about how she must be reacting right then. I envisioned her staying in her bed alone, thinking. I could see quiet tears making their way down her cheeks. We may have only known each other for twenty-four hours but the mutual attraction we felt – both mental and physical, was undeniable. And it was deep. I knew for sure she really liked me, but there was a lot I didn’t know about Julie Alright. I had no idea she hadn’t had a semblance of interest in any man since her modeling days ended sixteen years earlier in New York City. Nor did I know that back then she was engaged to Mark Richardson, a very promising young attorney. Mark was about to become the youngest partner ever at Dalrymple, Stockton and Stockton, one of New York’s most prestigious law firms. Julie and Mark had been dating for two years, and they had a big wedding planned for that fall. The ceremony was to be held in St. Patrick’s Cathedral, followed by a reception at the Waldorf Astoria. Money was no problem for Mark’s parents and they insisted on buying the grandest wedding available. His father, J. Walter Richardson of Scarsdale and Palm Beach, just happened to be the sole heir of the “American Grains” breakfast cereal fortune. At that time Julie was one of the big up-and-comers in the modeling world. As a matter of fact, she was just about to cross the threshold to cover-girl fame. But it never happened. One June morning, when she was on her way to the biggest shoot of her career, her sunny future eclipsed totally, and in an instant. Sitting in the back seat of a Checker cab, she was headed uptown to the world-renowned Clairidge Studios where she was to pose for an upcoming cover of Vogue Magazine. The sun was beginning to shine, but Madison Avenue was still slick from a late morning rain. Julie, who was sitting behind the driver, cranked down the window and held her left hand out in the breeze, drying her freshly applied nail polish. Then, just as the cab was crossing the intersection at 44th street, another cab, heading east, didn’t bother to stop for the red light. The driver of the at fault cab, one Eloi Hernandez, was so toasted on coke he didn’t even notice the light had turned red. Thoughts of stopping never entered his hopped-up mind until after he’d sped into the intersection – and slammed broadside into Julie’s cab. The impact to the driver’s door was so forceful that her driver’s neck snapped so far sideways it literally cracked. The two vehicles then skidded, smacking sideways into each other, crushing four of Julie’s fingers in the process.The driver of Julie’s cab, a Greek immigrant from Astoria Queens, whose name she never learned, was dead by the time the ambulances reached the scene. Julie was rushed to Mt. Sinai Hospital where a team of three plastic surgeons performed micro-surgery in an attempt to re-attach her fingers. Her middle and index fingers were salvaged and the nerves regenerated in due time, but her pinky and ring finger were so badly mashed there was no possible way of saving them. Eloi Hernandez did a short stint on Riker’s Island; the Greek was buried out in Queens by his family; and Julie’s potential international fame never materialized. On top of all that, when Mark Richardson found out Julie had lost two fingers, he decided that just maybe he wasn’t ready for marriage after all. After knotting the loose ends of her life together the best Julie could, she returned to Ft. Lauderdale with lost dreams and a broken heart.”
Buy your copy from AMAZON
Read more from this author on Wattpad

Something about the author Tom Winton has been listed as an Amazon Top 100 Author in Literary Fiction. It has been said that he is a man who writes with his pen dipped in his soul. Born in New York City, Tom has done everything from working on a railroad gang in the Colorado Rockies to driving a taxicab in Manhattan. He's been a mailman, a salesman, an entrepreneur and more. He now lives in Florida with his wife Blanche and their ill-tempered but loveable Jack Russell terrier, Ginger. They spend part of their time in Carmel, Maine. Mr. Winton's debut novel, Beyond Nostalgia, has been likened to such classics as Catcher in the Rye and To Kill a Mockingbird. Praised as "A 20th century Gone with the Wind," Beyond Nostalgia is a four-time Amazon Bestseller. His second novel The Last American Martyr has been on six bestseller lists at the same time. His third book, Four Days with Hemingway's Ghost, has been a repeat bestseller as well. Tom can be found online on Facebook, Twitter as @TomWinton, Goodreads, and Amazon
Posted by Kristen Stone at 22:03 No comments: