We, at Blue Hour Publishing, are pleased to say all our books are now available at Scribd and Page Foundry.

Links to where all books are available are on the author pages.
Posted by Kristen Stone at 22:59 No comments:

Recently Blue Hour Author Patrick Mulready popped over from Colorado to visit London. As part of his trip he took in a Bond tour. He did do other things as well, but here is his report on what he discovered about his favourite spy.


London is a city I have not visited for a quarter of a century.  So when I made plans to go there earlier this year, there was no way a James Bond fan like myself was going to miss out on the opportunities to see it as it has been shown in the films I discussed in "Licence:Reviwed"
The first part of my Bond London experience was a guided tour in which I visited a number of locations used in the films.  I learned that the “back door” to MI-6, as we see it in “Die Another Day” (2002,) is in fact a cleaner’s closet on the far side of Westminster Bridge from Big Ben.  And if you take the pedestrian underpass from that closet beneath Westminster Bridge, you come to the location of the photo shoot introducing George Lazenby to the world prior to the release of “On Her Majesty’s Secret Service” (1969.)  Speaking of OHMSS, the College of Arms is a very real place, and, I learned, the location of a chase scene between Bond and the assistant to the Sable Basilisk (who was, in the original version, a Blofeld plant.)  The chase involved a climb to the roof of the College of Arms.  Sadly, all this was cut from the final film for time.
Somerset House, located near Waterloo Bridge, is essentially a large, outdoor exhibition space.  But it featured as a location in two different Bond films.  In “GoldenEye,” (1995) with a 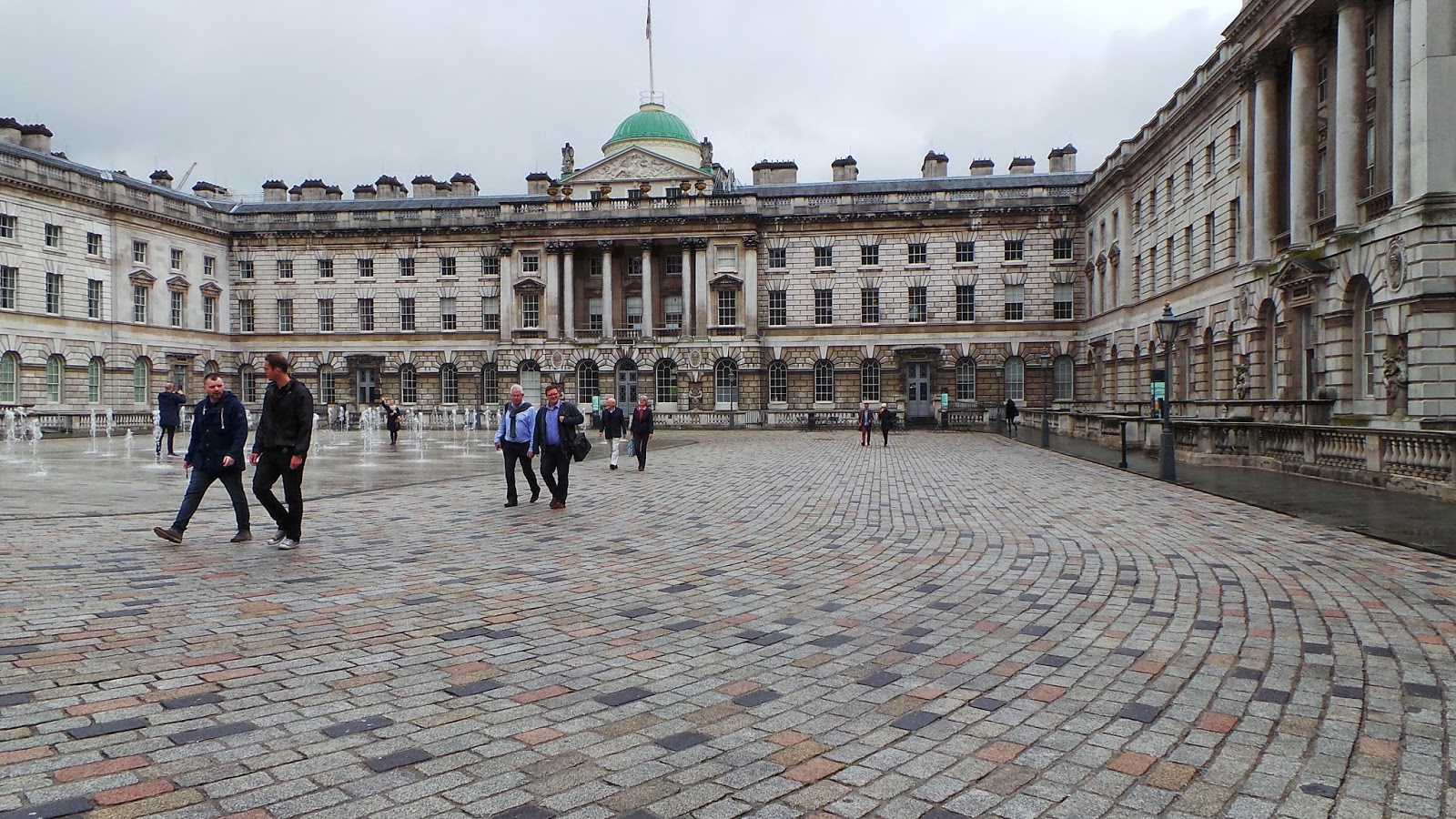 bit of exterior decoration and vehicles thrown in, it doubled as a traffic circle in St. Petersburg, Russia.  In the very next film, “Tomorrow Never Dies” (1997,) its archway gate off the Strand served as the entrance to the Admiralty Headquarters, as Bond drives his DB-5 to the meeting.

“The World Is Not Enough” (1999,) featured a pre-credit boat chase between Bond and Renaud’s Cigar Girl on the Thames and through several canals.  One of those canals is located at the Tobacco Docks off Wapping Lane.  You may remember this is where a couple of traffic wardens affixing a tire clamp on a car got drenched by Bond’s high speed fly-by.  Those (very real) traffic wardens were part of a BBC series on television at the time called “Clampers,” and one of those two wardens, Ray Brown, apparently took some glee in his reputation as the most hated man in London for his over-zealous pride in immobilizing illegally parked vehicles.  The pair weren’t warned ahead of time the scene would involve them being splashed, so their drenching came as something of a shock, and the expletives they uttered would probably have been inappropriate on film.
Obviously, much of “Skyfall,” (2012) took place in London, itself.  Multiple locations were used for the foot-race between Bond and Silva, M’s Enquiry Hearing, and the roof-top scene between Bond and Moneypenny near the film’s end.  But did you know the building to which Bond tails Patrice in Shanghai was actually an office building on Primrose Street.  Daniel Craig never set foot in China during the making of “Skyfall.”
It’s interesting to note that some of the locales referenced in the films are based upon very real places.  The Les Ambassadeurs Club, where we first meet Sean Connery’s Bond in “Dr. No” (1962,) is in fact a very real place in London, and a frequent haunt of Ian Fleming, himself.  It’s located not far from the Dorchester Hotel off Parklane, and dedicated Bond fans will appreciate that the Dorchester Hotel has long been associated with Cubby Broccoli and Harry Saltzman during the early years of the Bond franchise as the site of important meetings and press launches of new films. 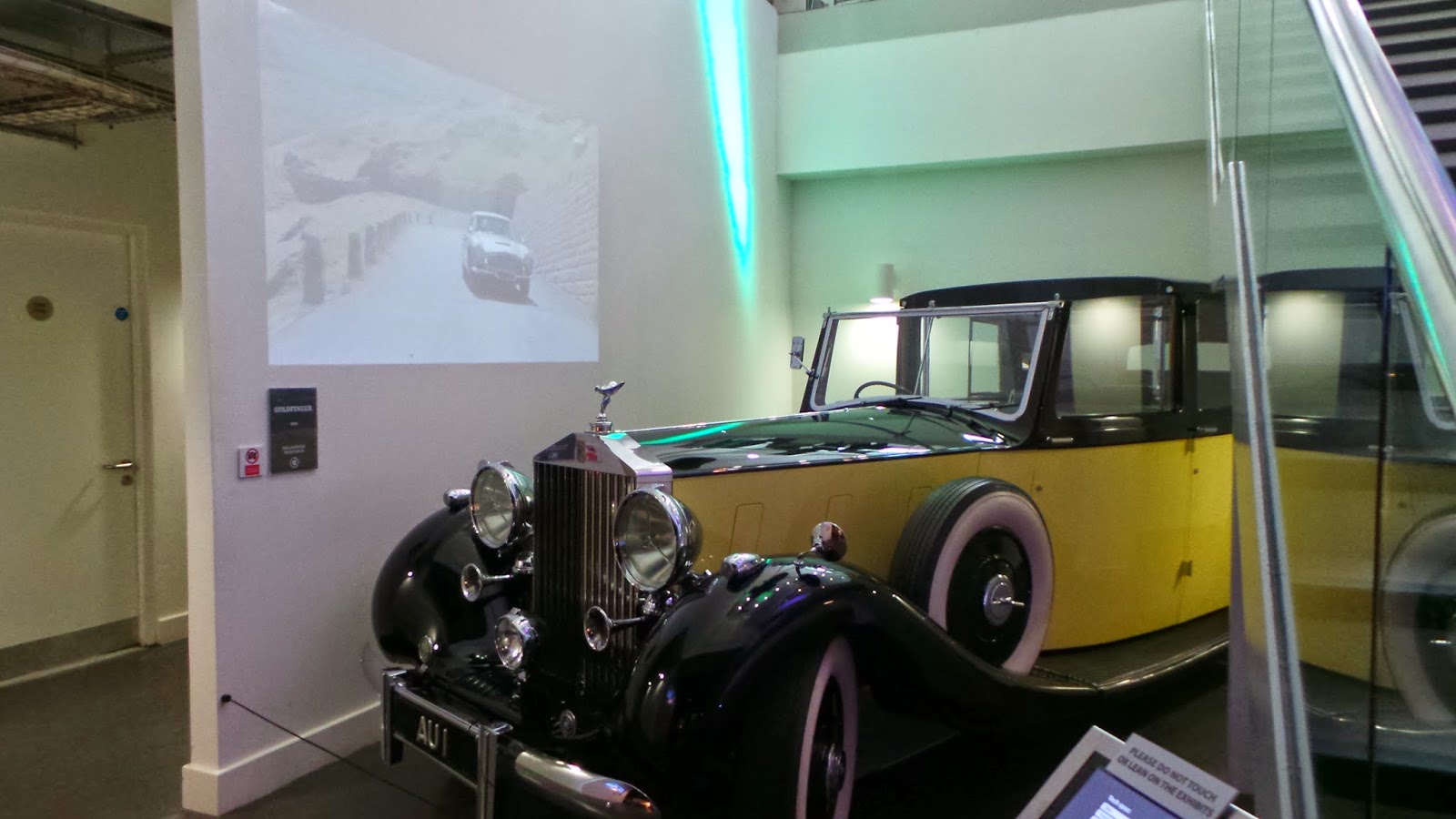 After the three hour tour, my Bond experience wasn’t done.  As luck would have it, currently on display in London is the Bond In Motion Exhibition at the London Film Museum in Covent Garden.  This exhibit features an enormous collection of the vehicles used in Bond films, from Goldfinger’s Rolls Royce Phantom III, to the actual Aston Martins Bond destroyed in both “Casino Royale” (2006) and “Quantum of Solace” (2008).  Yes, you’ll see the DB5, too – no Bond exhibit would be complete without that. 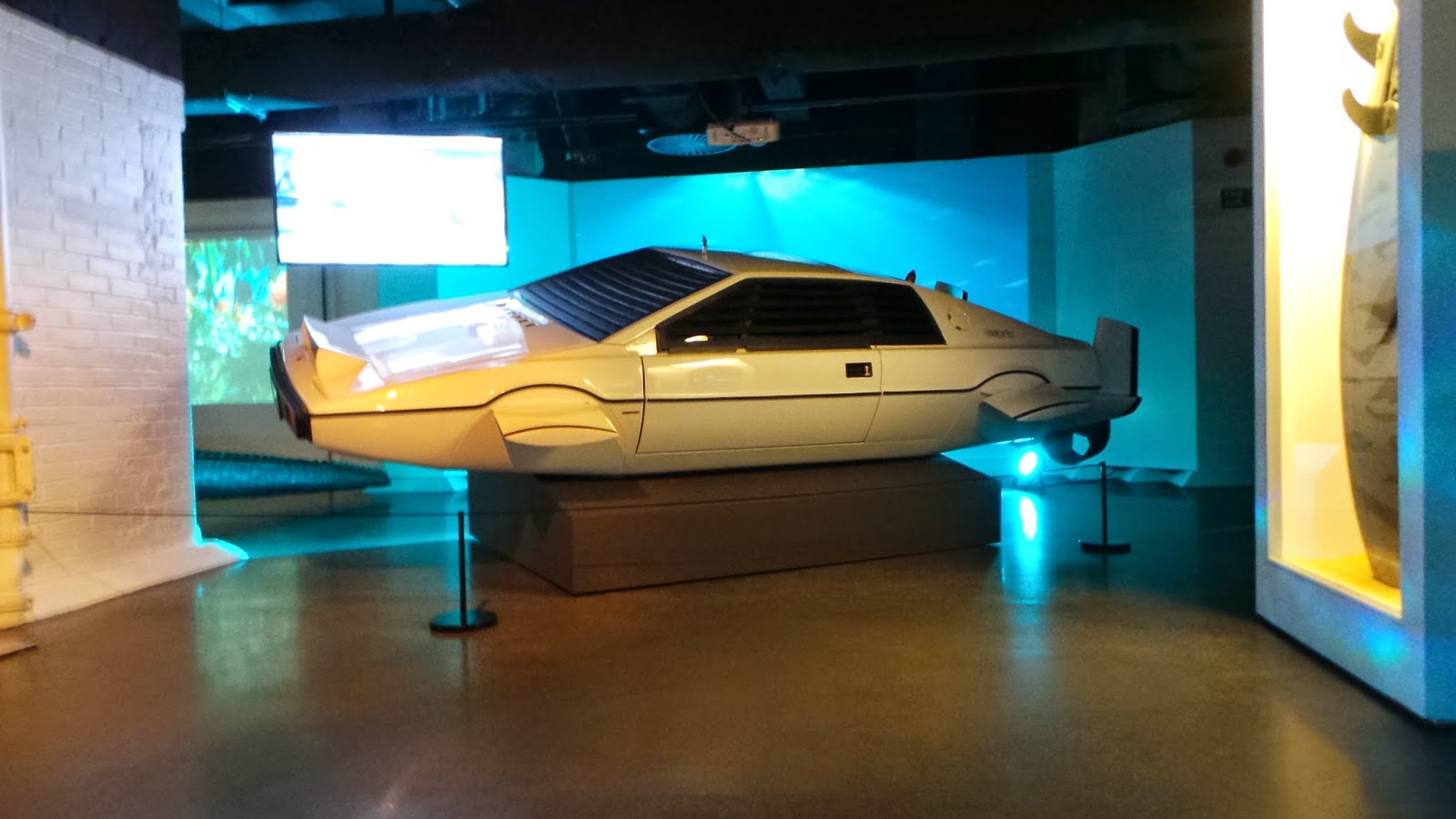 But the exhibit is actually a bit cleverer than that.  You see, this isn’t just a display of cars, aircraft and motorcycles.  It’s a chance for the art and model-making departments within EON productions to demonstrate what they’ve achieved.  From the model of the submarine Lotus Esprit used in “The Spy Who Loved Me” (1977) to the Soviet diesel train engine from “GoldenEye,” there’s a load for all Bond fans to see, inform and enjoy.  I don’t think people realize just how good the model makers associated with the films really are.  For example, in “Skyfall,” M’s Jaguar is stopped by police on Vauxhall Bridge, and M looks on in horror as her offices are demolished in a gas explosion.  All of that was accomplished using models, but you’d never guess that, watching the film.
The Bond In Motion Exhibition will be in place at the London Film Museum through the end of 2014.
And here’s a “did you know?” factoid on which to conclude: in 1999, when the very real MI-6 learned that filming for “The World Is Not Enough” involved a location shoot in the Thames just outside their building, they moved to prohibit it, citing a security risk.  (Really?  You mean the world doesn’t already know where MI-6 is headquartered in London?)  However, Foreign Secretary Robin Cook, at the urging of Member of Parliament Janet Anderson, over-ruled MI-6’s objections, thus allowing filming to take place.  Of the decision, Cook famously remarked, “After all Bond has done for Britain, it was the least we could do for Bond.”
Posted by Kristen Stone at 22:44 No comments: